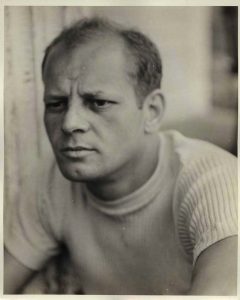 in Cody, Wyoming. He grew up in Arizona and California and in 1928 began to study painting at the Manual Arts High School, Los Angeles. In the fall of 1930 Pollock moved to New York, and studied at the Art Students League under Thomas Hart Benton, who encouraged him throughout the succeeding decade. During this time, Pollock studied and admired the murals of José Clemente Orozco and Diego Rivera. Although he traveled widely throughout the United States during the 1930s, much of Pollock’s time was spent in New York, where he settled permanently in 1934 and worked on the Works Progress Administration Federal Art Project (1935–42) and in David Alfaro Siqueiros’s experimental workshop in New York (1936).

In 1943, Pollock began working with Peggy Guggenheim, who contracted him through 1947, permitting him to devote all his time to painting. His first solo show was held at Guggenheim’s Art of This Century, New York (1943). Prior to 1947, Pollock’s work reflected the influence of Pablo Picasso and Surrealism and during the early 1940s he contributed paintings to several exhibitions of Surrealist and abstract art, including Natural, Insane, Surrealist Art (1943) at Art of This Century, and Abstract and Surrealist Art in America (1944), organized by Sidney Janis at the Mortimer Brandt Gallery, New York. By the mid-1940s, Pollock was painting in a completely abstract manner, liberating himself from the vertical constraints of an easel by affixing unstretched raw canvas to the floor. In 1947, his now widely recognized “drip style” emerged, marked by the use of sticks, trowels, or knives to drip and splatter paint, as well as pouring paint directly from the can. Reminiscent of the Surrealist notions of the subconscious and automatic painting, Pollock’s drips, also called “action paintings”, revolutionized the potential for contemporary art and furthered the development of Abstract Expressionism.

In 1945 Pollock married the artist Lee Krasner, and in the fall of that year they moved to Springs, East Hampton, New York, where they would remain together until his death in 1956. Pollock’s first European solo exhibition was at the Museo Correr, Venice, in 1950. In 1952 Pollock’s first solo show in Paris opened at the Studio Paul Facchetti, and critic Clement Greenberg organized his first retrospective at Bennington College, Vermont. He was included in many group exhibitions, including the Whitney Annual (later Whitney Biennial) from 1946 and the Venice Biennale in 1950. Although his work was widely known and exhibited internationally, the artist never traveled outside the United States. He was killed in an automobile accident on August 11, 1956, in East Hampton.

Jackson Pollock’s shift from the abstract ‘poured’ paintings of 1947-1950, which placed him at the peak of American artistic accomplishment in the twentieth century, to the image-forming ‘Black Paintings’ in 1951 was accompanied by a unique episode in his career: the decision to create a portfolio of silkscreens, selecting six from the group of fully realized paintings to translate into a new medium. Pollock was assisted by his brother Sanford McCoy who was skilled in printmaking processes. 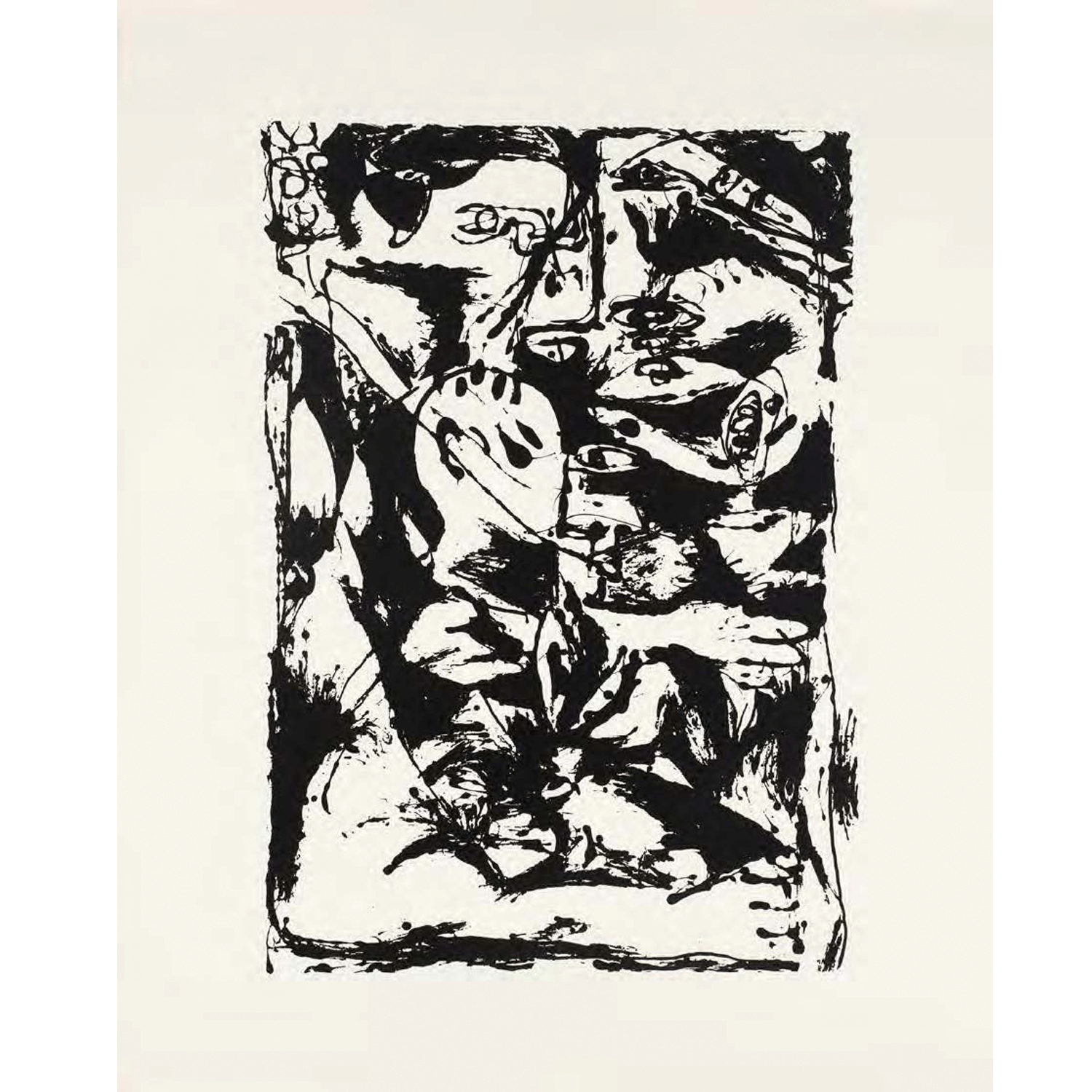 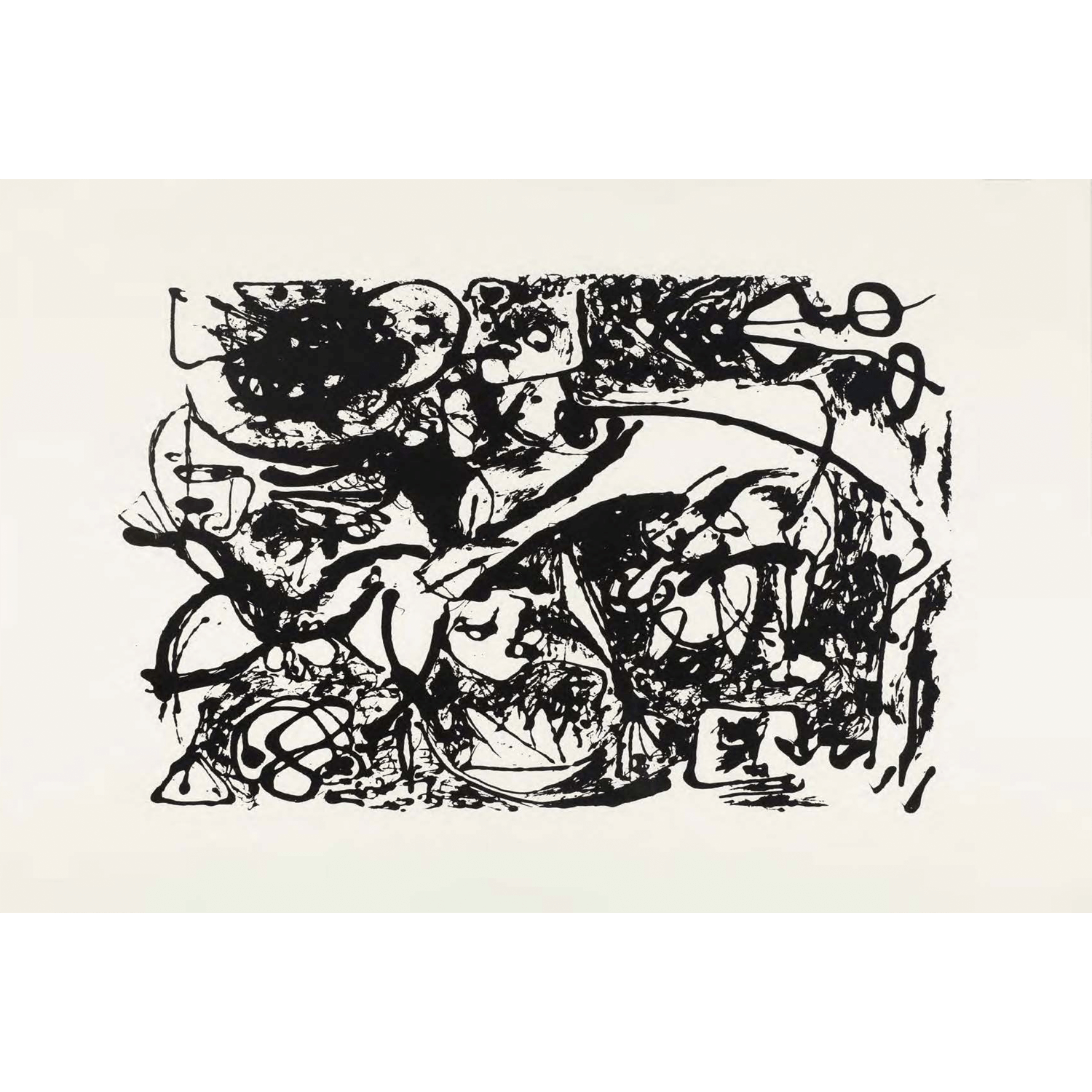 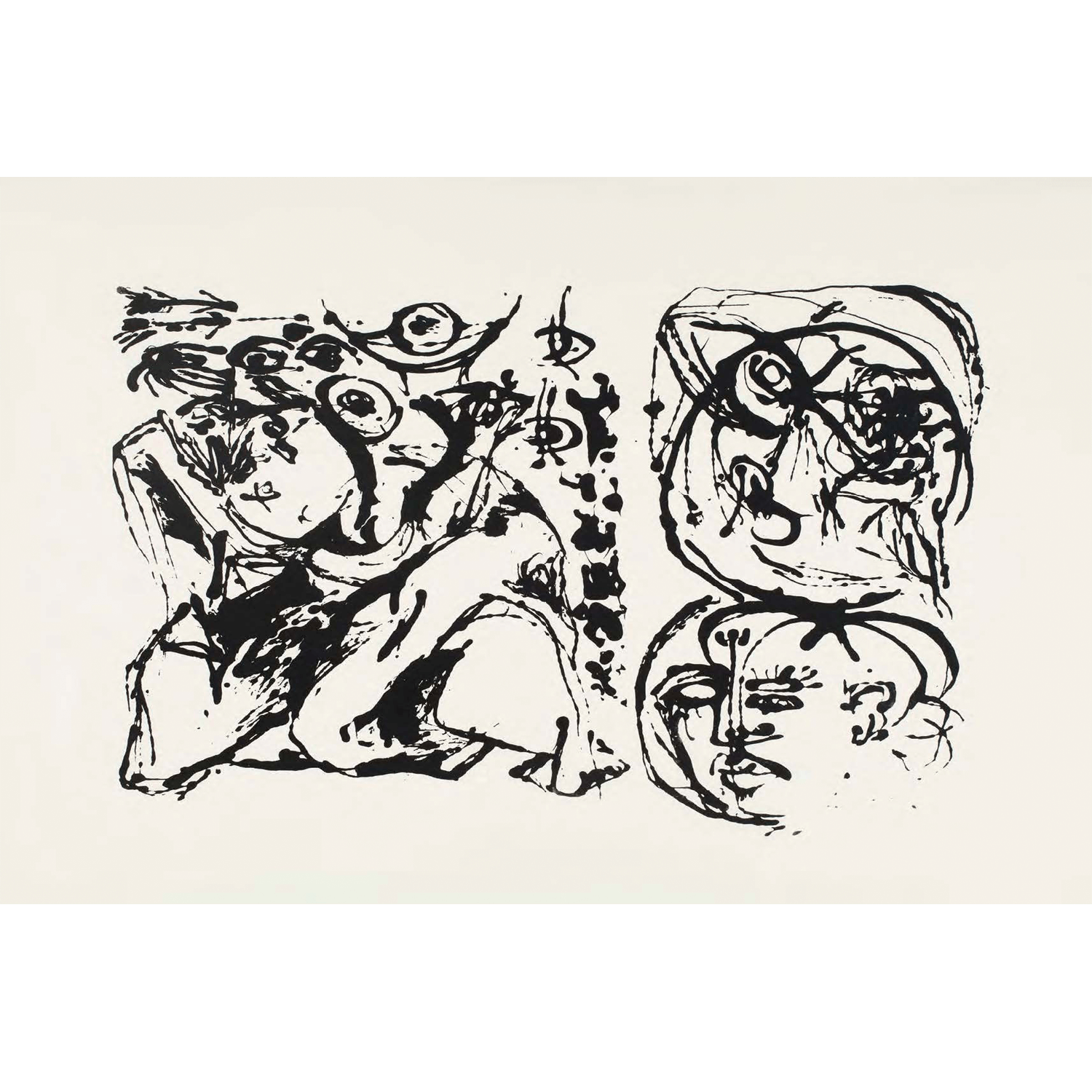 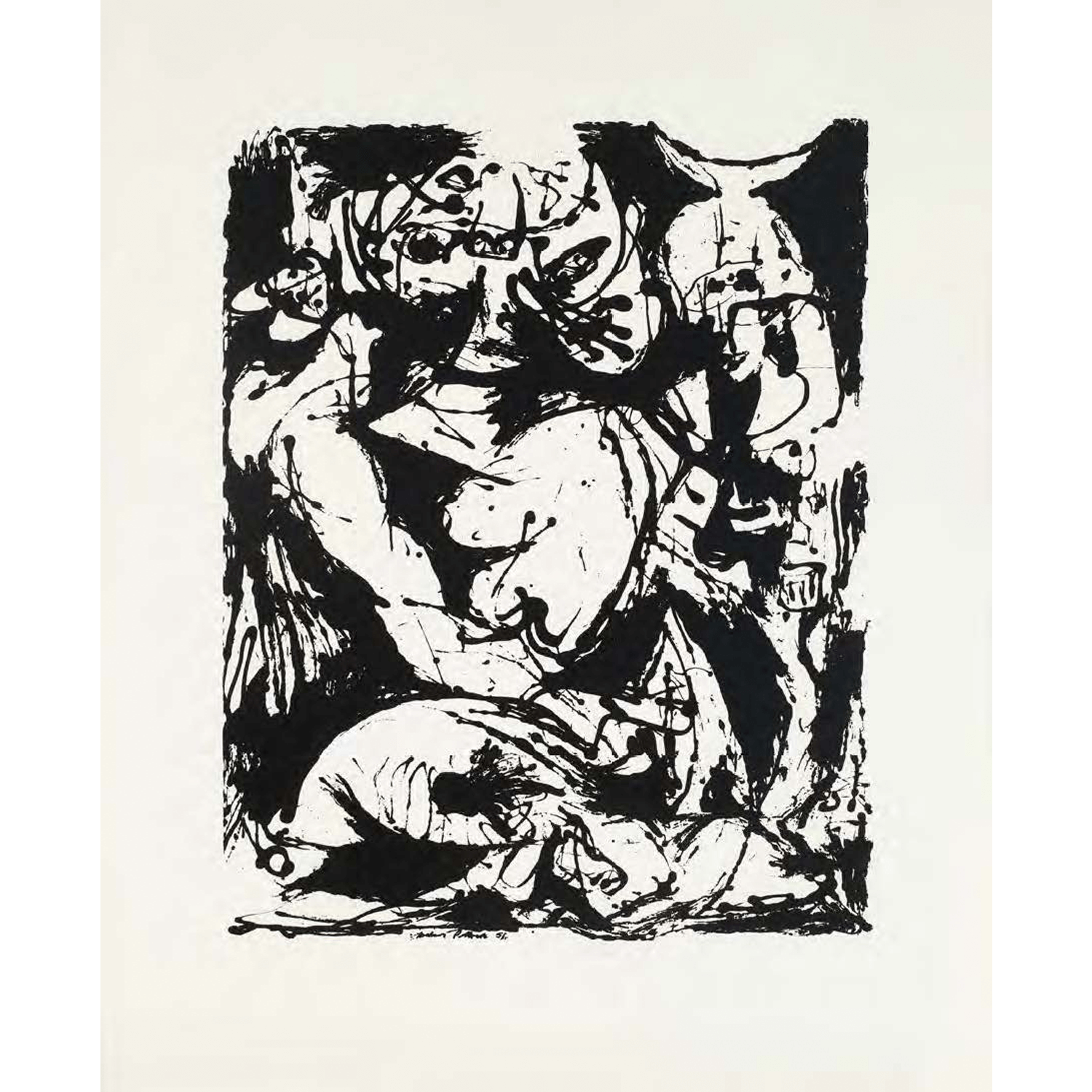 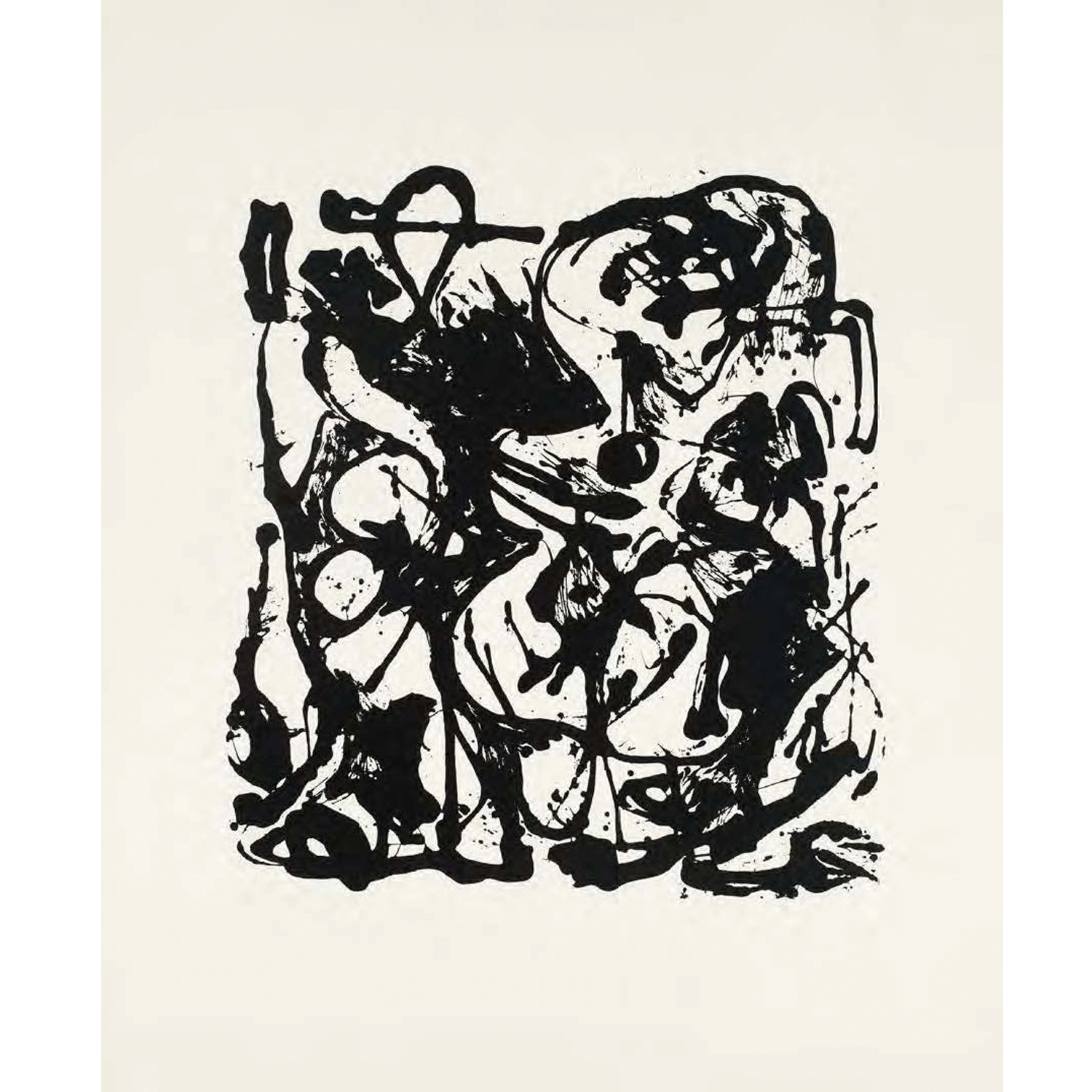 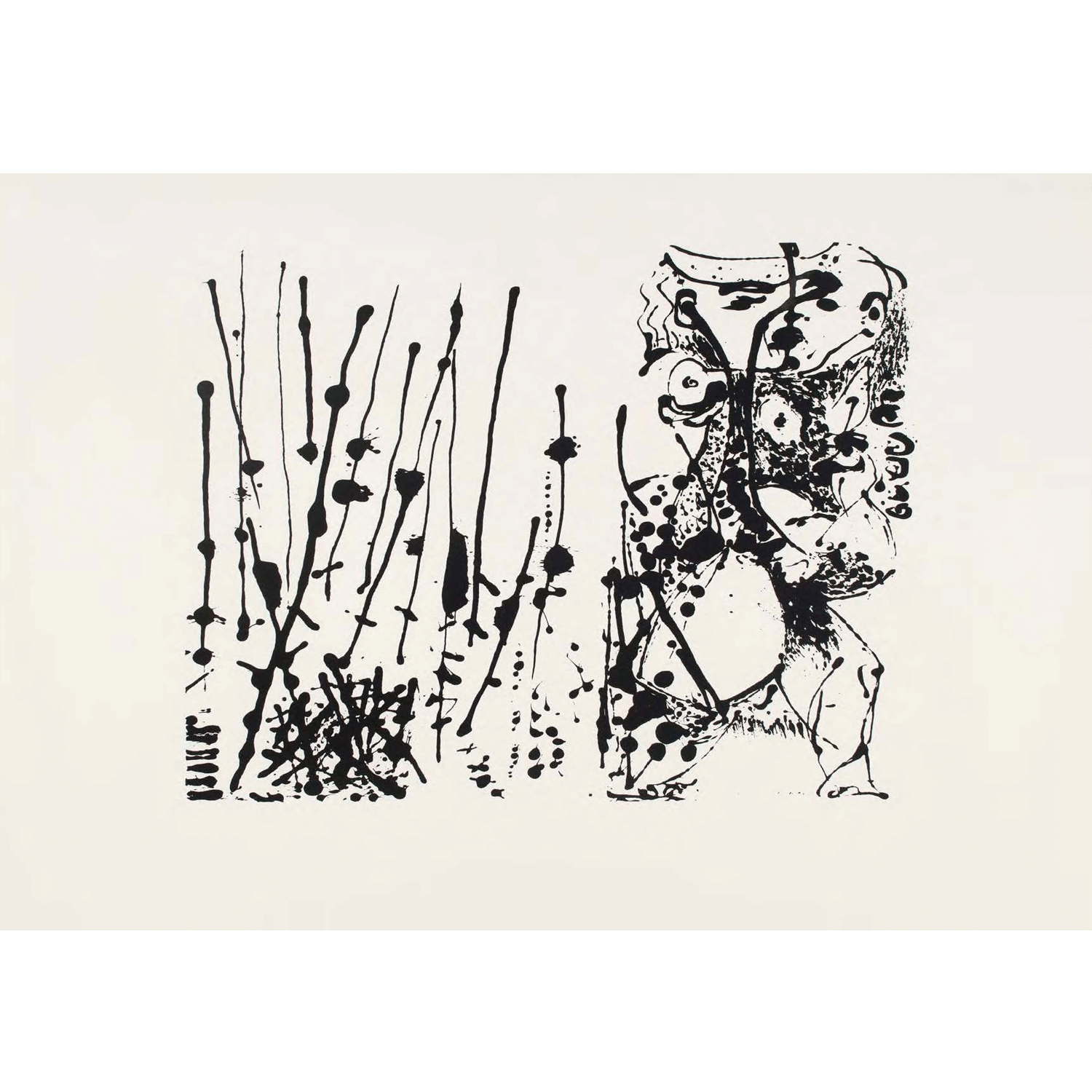 Jackson Pollock experimented with different printmaking processes at various times in his career. In the winter of 1944-45 he worked in S.W. Hayter’s celebrated Atelier 17, which was frequented by large numbers of avant-garde artists both in its first home in Paris, and in New York during World War II. Pollock habitually used intense drawing to work out ideas and, especially in this period when notions of Surrealism and ‘automatism’ pervaded the New York art scene, to explore the transmission of half-formed ‘subconscious’ imagery on a two-dimensional plane. It is worth remembering that the printing process reverses the artist’s initial marks made on the copper plate.

During the war, Atelier 17 had migrated from its original home in Paris, to which it would return in 1950. In 1967 Robertson, by then retired from his directorship of the Whitechapel Gallery, rediscovered these copper plates at the Krasner-Pollock home in the Hamptons, and with the help of Krasner and Bill Lieberman arranged for prints to be made by the Hungarian Gabor Peterdi, (then teaching at the Yale School of Art) and the Italian Emiliano Sorini.

These Intaglio Prints from 1967 can be seen in our gallery. 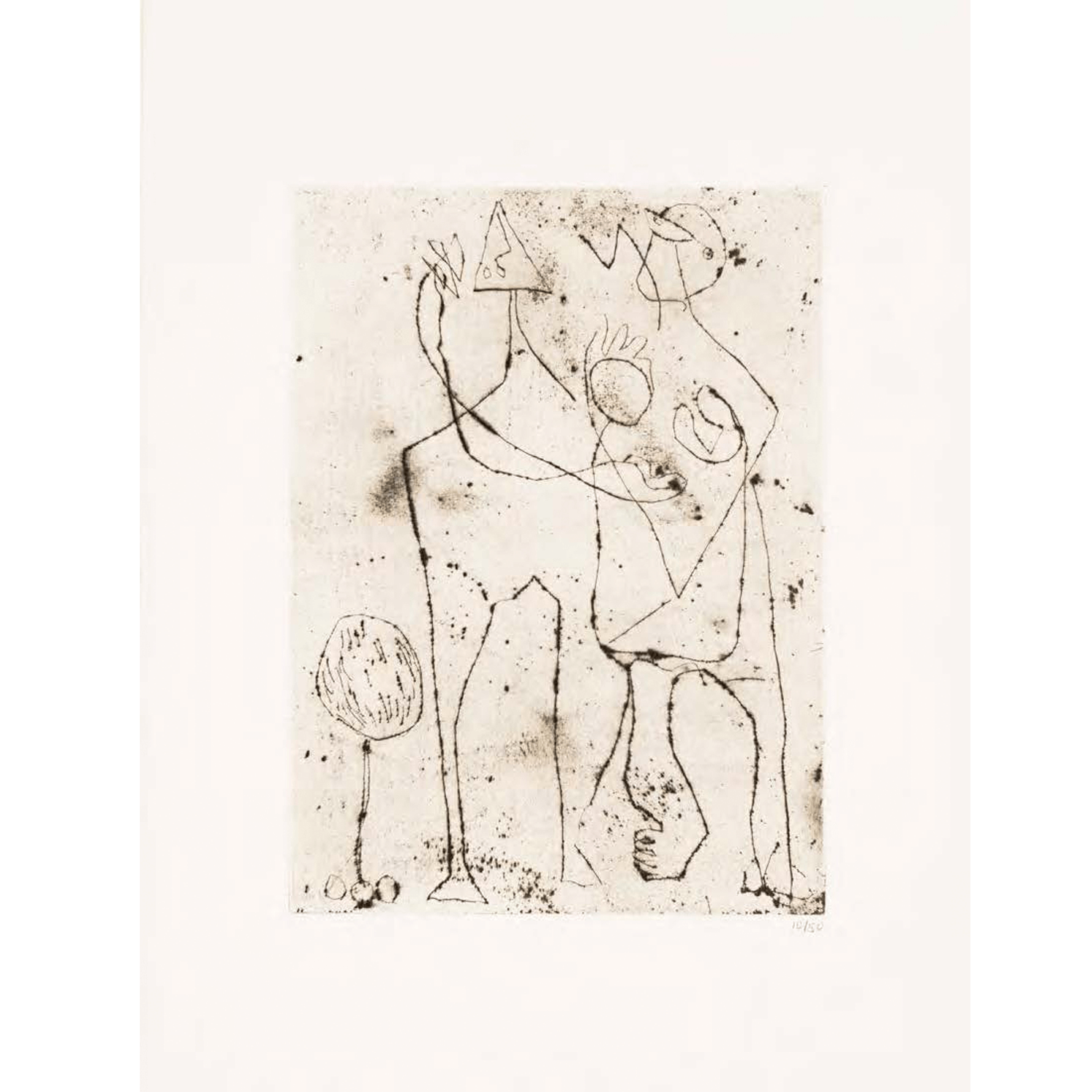 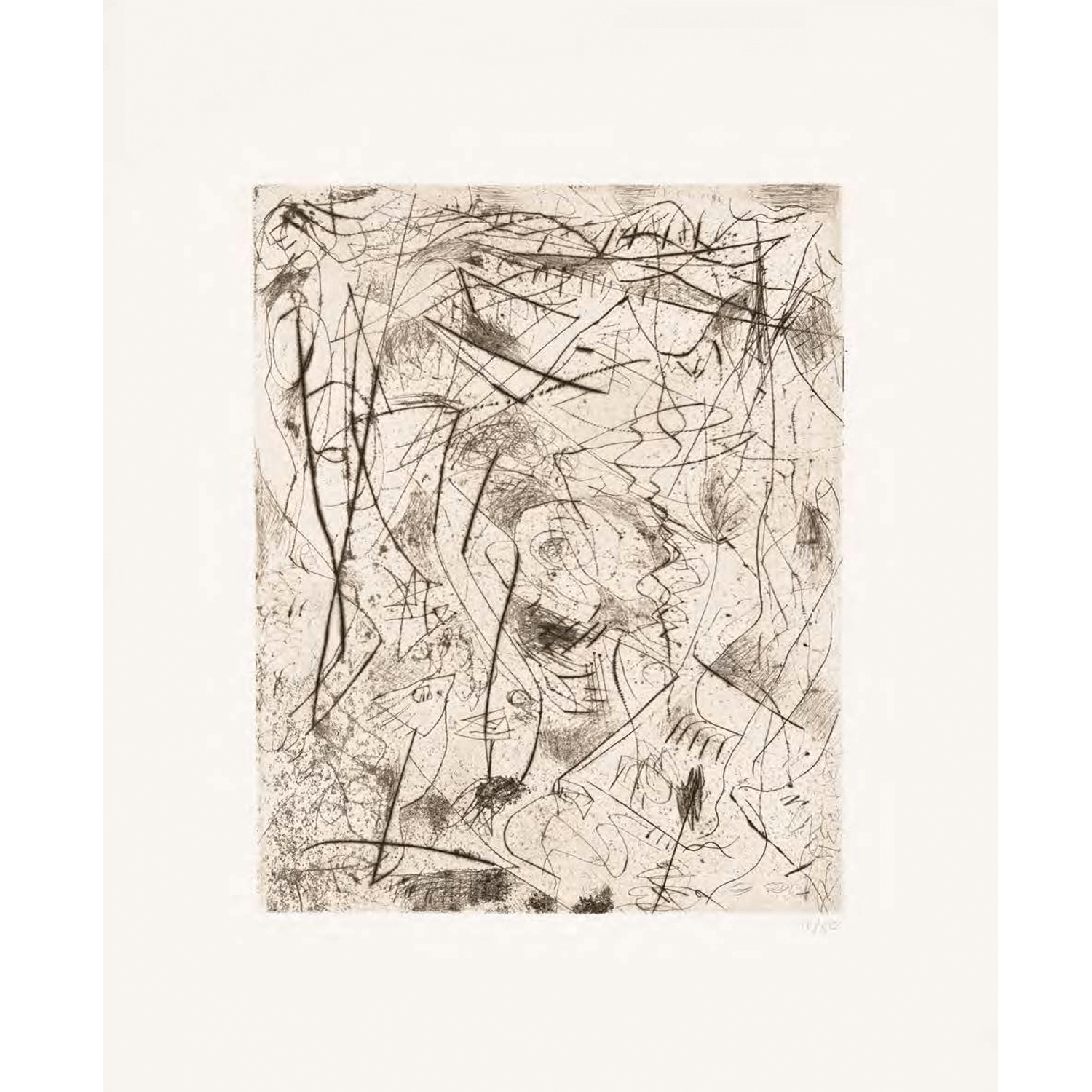 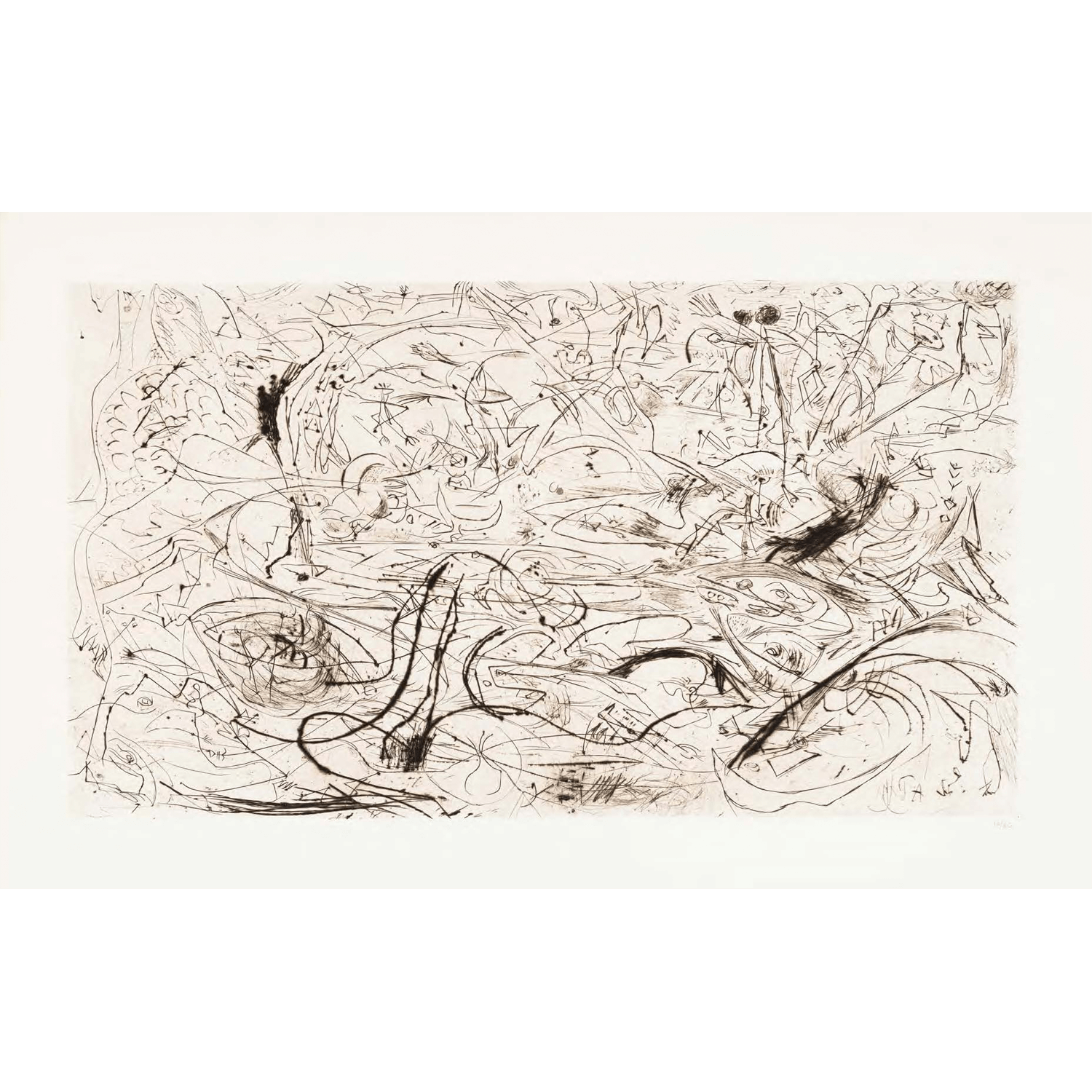 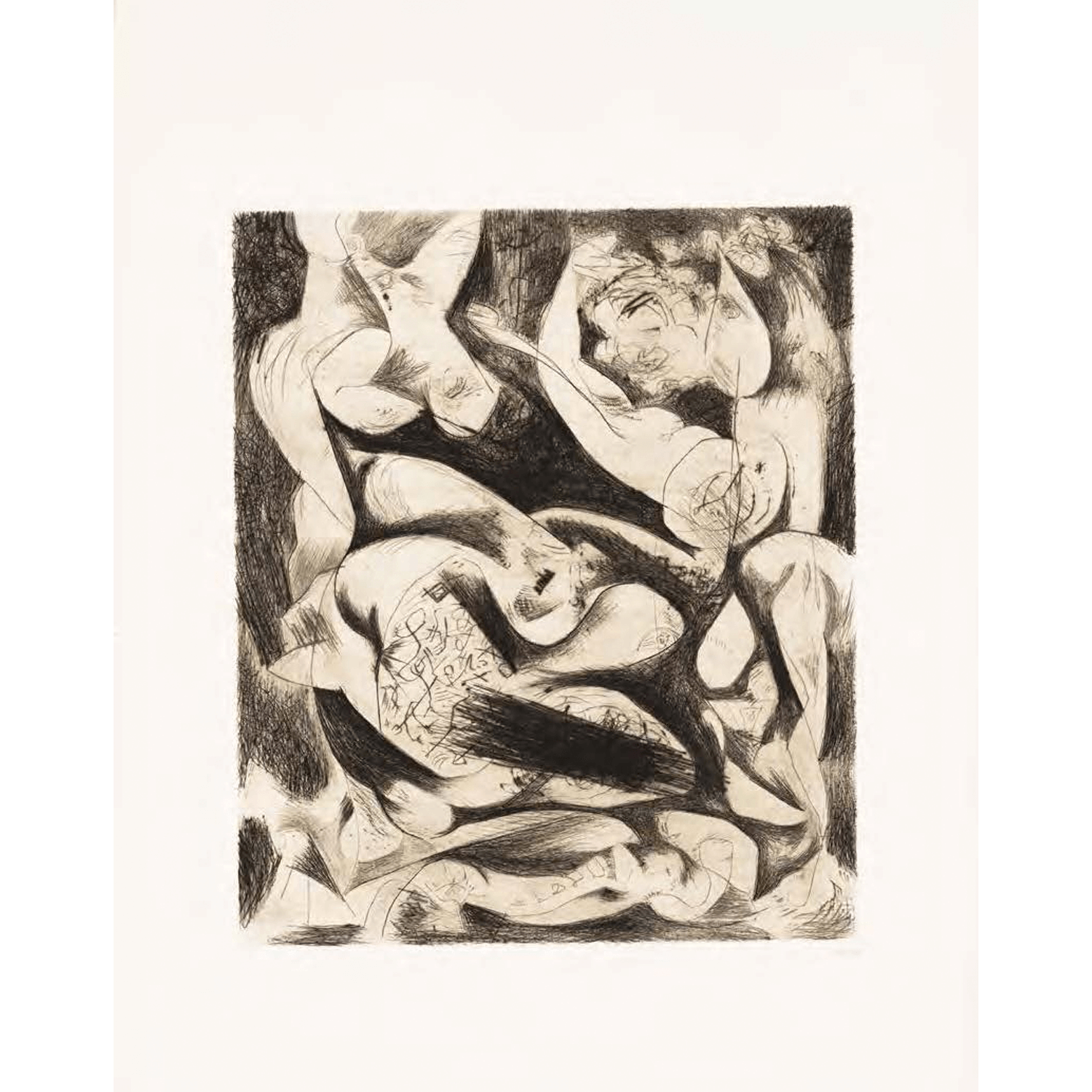 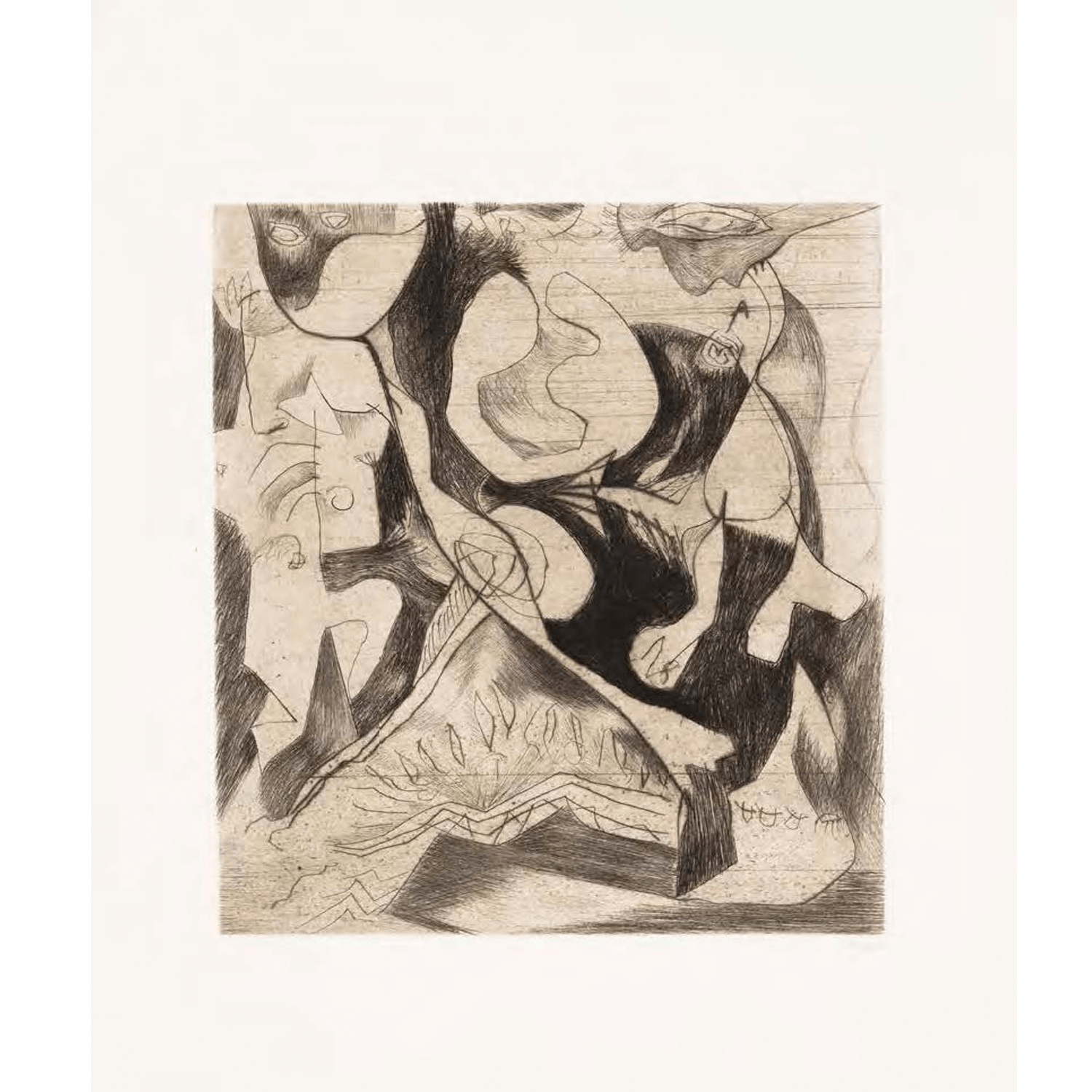 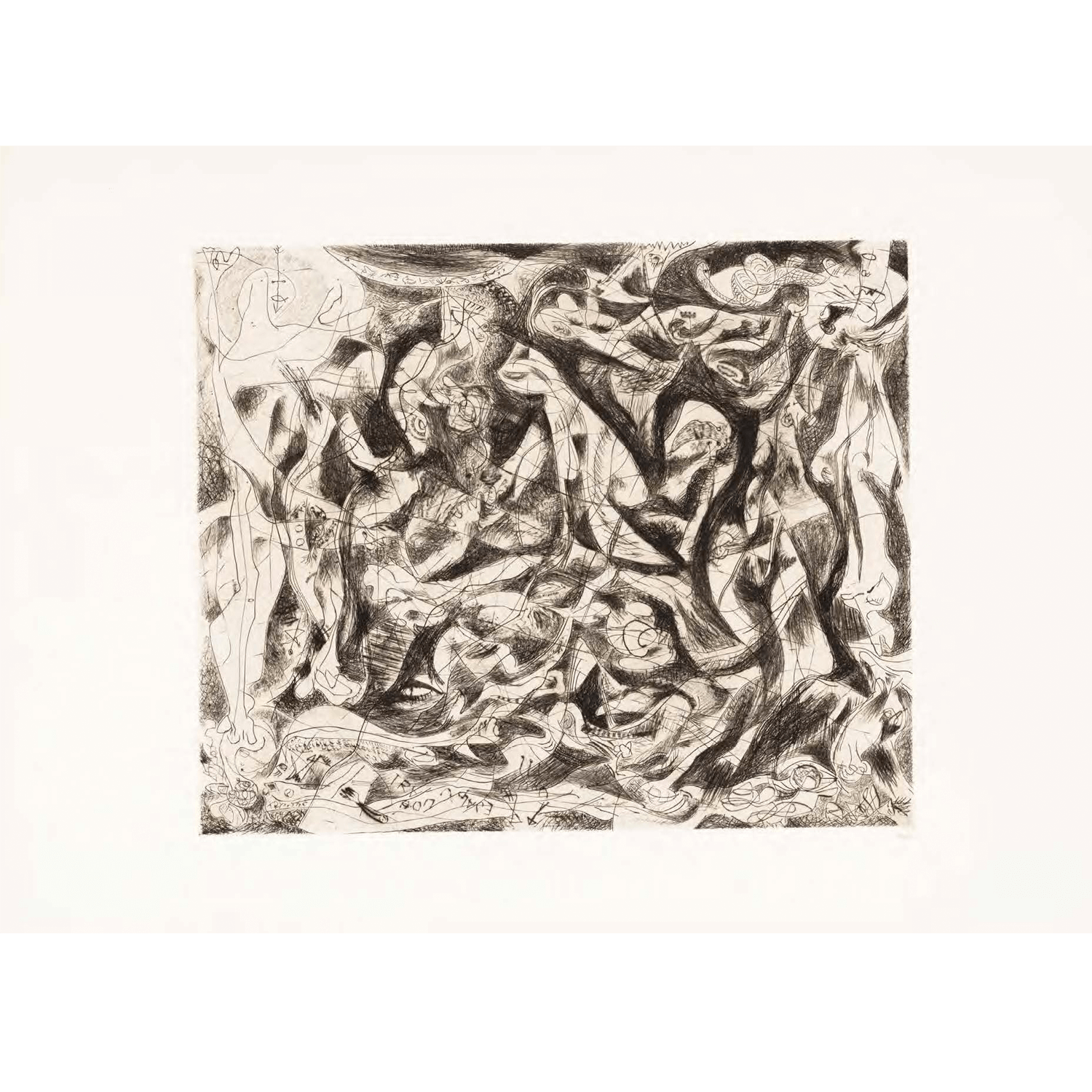 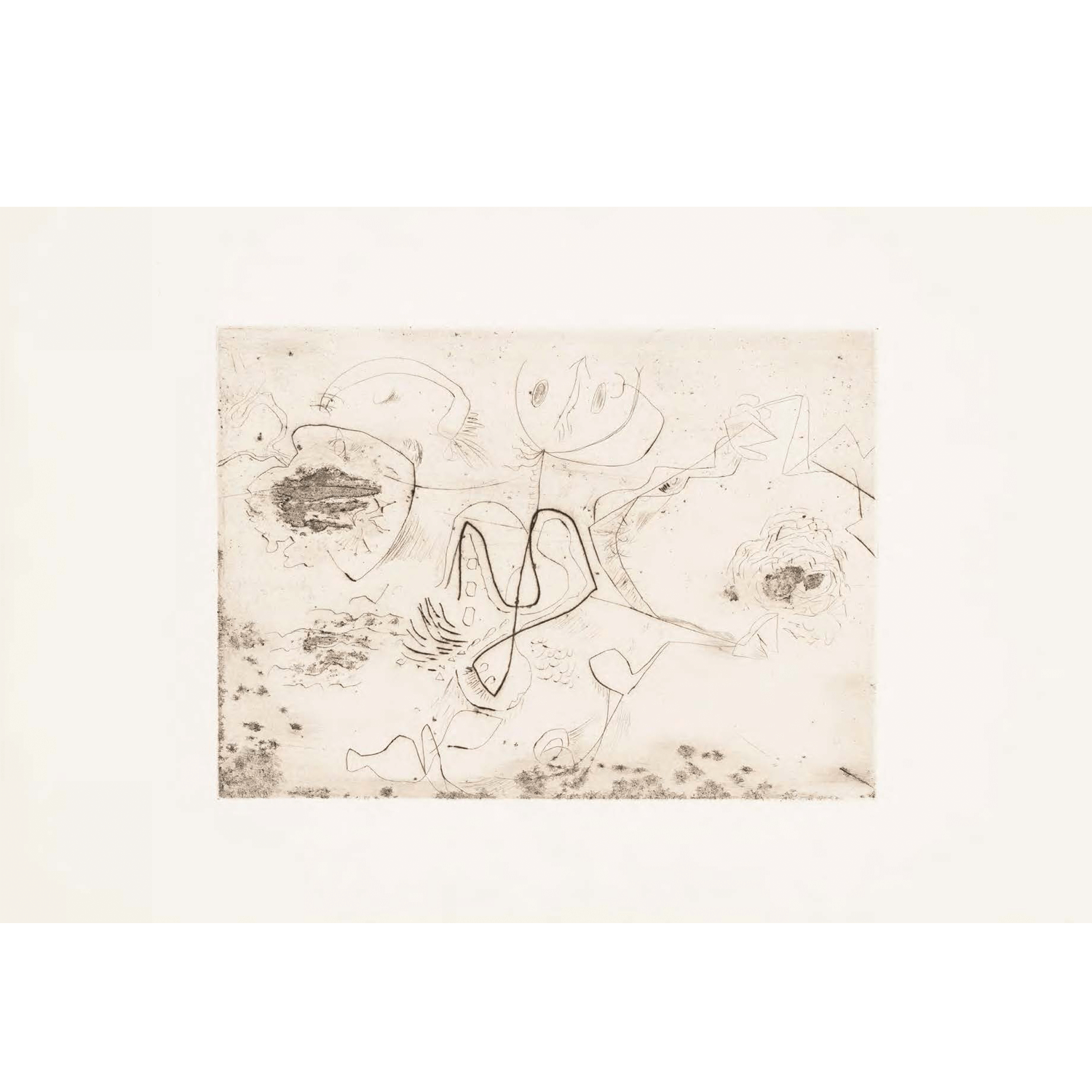